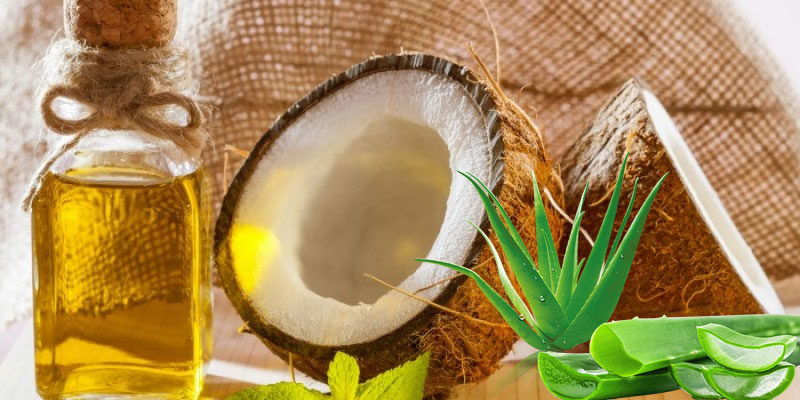 According to the American Academy of Dermatology, acne is the most common skin disorder in the United States, affecting an estimated 40 to 50 million people across the nation. While acne usually begins in puberty, this unpleasant inflammatory condition — which manifests as pimples, lumps and plugged pores across the body, especially the face and back — is not restricted to a specific age group, and can occur at any time. In fact, almost 85 percent of people will suffer from acne at some point in their lives.

Given how widespread acne is in today’s society, it isn’t surprising that acne treatment is a billion dollar industry for Big Pharma. However, most commercial acne creams are packed with unnatural and aggressive chemicals, making them an unacceptable choice for health-minded individuals. Fortunately, two foods found in nature — aloe vera and coconut oil — are proven to treat acne effectively and without side effects.

There’s a good reason why aloe vera is found in so many cosmetic products: this succulent and mucilaginous plant, which is characterized by its green, spear-shaped leaves, is well-known for its ability to heal, soothe and rejuvenate the skin. Indeed, virtually all cultures that had contact with aloe vera came to recognize its significant skin-boosting properties over time, and it remains a popular natural remedy for treating skin issues such as eczema, psoriasis, burns and rashes.

However, a recent study published in The Journal of Dermatological Treatment has discovered that aloe vera is also effective at treating acne. For the study, the researchers assembled a group of 60 subjects suffering from mild to moderate acne and, over an eight-week trial period, treated them with a formulation of either tretinoin cream and aloe vera topical gel or tretinoin cream and a placebo. At the end of the trial, the results were undeniable: “The combination TR/AVG was well tolerated and significantly more effective than TR and [the placebo] for the treatment of mild to moderate acne vulgaris.”

To use aloe vera for acne, simply apply some aloe vera gel onto the affected area daily. The gel will improve the swelling, redness and inflammation associated with acne, and also prevent future outbreaks.

Like aloe vera, coconut oil is beloved for its skin-boosting properties, and is used throughout the world as an anti-aging cream, natural sunblock, lip gel, moisturizer and massage oil. It is also effective at treating skin disorders, and is shown to combat blisters, pimples, sores, rashes and more.

In fact, there doesn’t seem to be any skin condition that coconut oil can’t at least improve, at that’s also true of acne. In 2009, Chinese researchers found that the main saturated fatty acid in coconut oil, lauric acid, possessed even stronger antibacterial activity against acne than palmitic acid or oleic acid. Furthermore, lauric acid loaded with liposomes (vesicles that can administer nutrients) was shown to “fuse with the membranes of P. acnes and release the carried [lauric acid] directly into the bacterial membranes, thereby killing the bacteria effectively.”

These results, which were published in the journal Biomaterials, suggest that the topical application of coconut oil can treat acne effectively. For maximum benefits, choose raw coconut oil made that is organic, cold-pressed and extra virgin. This kind of oil will actually smell of coconut, signifying minimal processing.