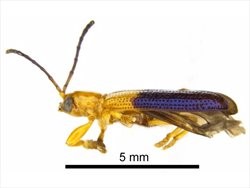 Coconut leaf miner/hispid beetles are a serious pest insect of coconut in most of the Asian countries. There is a high risk of outbreaks through incursions into new environments.

Coconuts are the most important crop attacked, but the beetle also infests betel nut, sago palm, and a number of ornamental and wild palms. It is not a pest of oil palm. 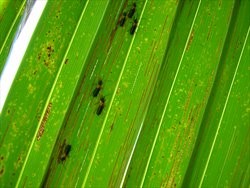 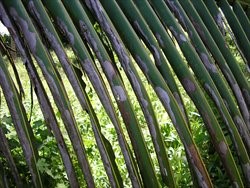 Photo 3: Large areas of decay on coconut leaflets after the leaves have been attacked by the coconut leaf miner, Promecotheca species.

The ant, Oecophylla smaragdina, was found to be of the greatest importance in controlling Promecotheca papuana in Papua New Guinea, which also occurs in the Solomon Islands. And the ants, Pheidole and Technomyrmex, are also known to attack egg masses.