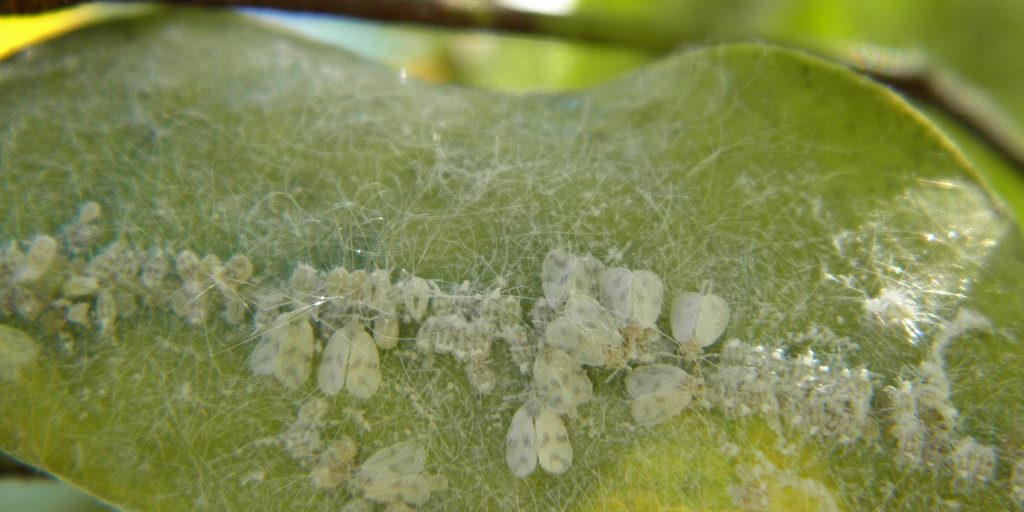 Rugose Spiralling Whitefly (RSW) (Aleurodicus rugioperculatus Martin) is an invasive pest on coconut reported from Pollachi, Tamil Nadu and Palakkad, Kerala during July-August 2016. Reported first from coconut during 2004 at Belize, the pest had threatened coconut palms in Florida during 2009.

RSW is a small sap-sucking insect belonging to Hemiptera Order which is taxonomically related to mealy bugs and aphids. The adult whitefly looks like a very small moth and has a body length of about 2 mm. Wings of adults are white and have dark spots on the forewings.

In the recent survey, we could observe at least ten alternate host plants (Guava; Banana, Nutmeg, Colocasia. Annola Drumstick, Mango, and Jackfruit) in coconut homesteads, but the pest is relatively more confined to coconut and the reason for its selective preference more aligned towards coconut indicates its host preference to coconut.

The shift in weather pattern reflected as deficit monsoon could be one of the primary reasons for the immediate upsurge of spiraling whitefly. They are so sensitive to wet season and heavy rains and the recent deficit in monsoon (>35% in Kerala), which triggered a drop in relative humidity (up to 7% compared to the previous year), is the immediate reason for the flare-up.

The immature and adult whitefly by their sucking feeding habit, siphon out coconut sap by selective feeding on the undersurfaces of the leaflets. Extensive feeding of the insect leads to the excretion of honeydew which subsequently gets deposited on the upper surface of the leaves positioned down beneath or even on other understorey crops. Honeydew excrement, being sweet and watery, attracts ants and encourages the growth of the fungus Capnodium sp. which causes disfigurement (Black layer over the leaves) of hosts affecting the photosynthetic efficiency of the plant. Since the black tinge on crop plants (sooty mould) are mere sugar feeding fungus, farmers need not be worried about such tinge on crops plants as they are not poisonous. despite heavy incidence of whitefly on coconut, it is not practically causing any economic crop loss and, therefore, there is absolutely no need for any panic. In the recent survey conducted in heavily affected gardens, cutting across all age groups of palms, as high as 60-70% of the fronds was found infested by the pest. The prevalence of the pest was noticed from the outer whorls and slowly progressed towards the inner whorls, whereas, the emerging fronds were not infested.

In the present investigation, we could observe that more than 50% of the whitefly was parasitized by a tiny hymenopteran parasitoid, Encarsia sp. (<1 mm size) from different tracts of Kerala indicating the natural build of the parasitoids. This is one of the classical biological control strategies and any disturbance in the buildup of Encarsia sp. would invariably affect the long-term approach in pest bio-suppression.  In addition, lady beetles belonging to Jauravia sp. and a wide array of spiders were also noticed. With the emergence of A. rugioperculatus in coconut and natural build-up of Encarsia sp. in Kerala, it could be well understood that the pest-defender system should be carefully conserved in the region so as to encourage population build-up of the natural enemies. Parasitism was relatively low in pesticide-sprayed gardens in Pollachi, Tamil Nadu. The parasitism percentage ranged from 25-30% indicating the upset in distribution of parasitoid due to indiscriminate use of pesticides